Ready to fly a TAA? Indeed, what is a TAA?

A TAA is a Glass Cockpit airplane. The FAA calls these airplanes Technically Advanced Airplanes, or TAAs. The first TAA in Sundance is our Bonanza, N7201N. We can fly it just like the most modern airliner, using the autopilot from takeoff to just before touchdown entirely through its advanced GPS, autopilot and Aspen glass Primary Flight Display, or PFD. But all this comes at a price - pilot training! The Bonanza is an airplane that is an integrated system. The engine mixture setting is monitored around the avionics and the result of adjusting it (or any other flight parameter) can be monitored in various displays. The pilot needs to be comfortable in all aspects of the cockpit and make decisions while traveling at 200 kt over the ground.

The heart of the system avionics is the Aspen Evolution PFD. This is the primary interface between pilot and the panel, replacing all the flight instruments, controlling the autopilot and displaying Nav/Com/GPS data and flight plans.

Luckily, the Aspen system is extremely modular. A pilot does not have to learn everything at once, and to assist with this we have just completed installing an Aspen Evolution PFD in the Archer, N2865M. Now you can start to learn to use a PFD without having to master all the complexities of the Bonanza at the same time. 65M, with its WAAS enabled GPS, makes the ideal introduction to the TAA. If you have been checked out in the Archer, you will need to requalify. This will involve both ground and flight components, so check with your CFI. If you have not checked out so far, now is the time to do it!

Transition courses start this month. Enroll in one and experience Evolution! 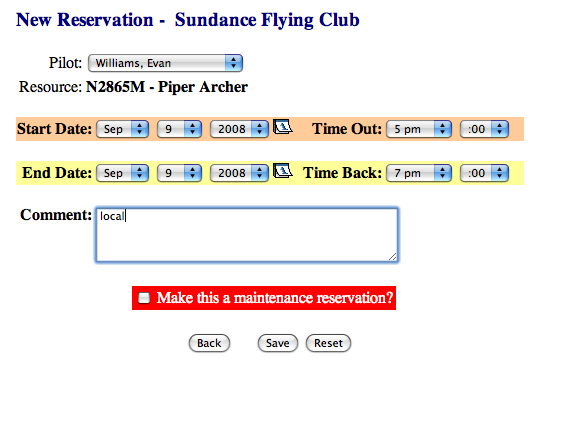 The FAA rewrote the FARs with respect to charitable flights in 2008. One of the key clarifications is how a local flight is defined (see 91.146 and 147). Basically a local flight is one in which you take off and land at the same airport, and stay within 25 miles of the airport while in flight.

The same rules apply to the Sundance scheduling system, for somewhat different reasons. When you schedule a plane you are required to enter a comment. Part of this comment should be the destination airport. You should only use local if the flight meets the above definition.

Why do we require this?

The same applies to using tbd in the comments field. There is no airport identifier TBD, so you can't be going there!

From now on, we will be deleting reservations in which the comment is tbd. A reservation using local will be queried unless it is obvious that the flight is likely to meet the local criteria. 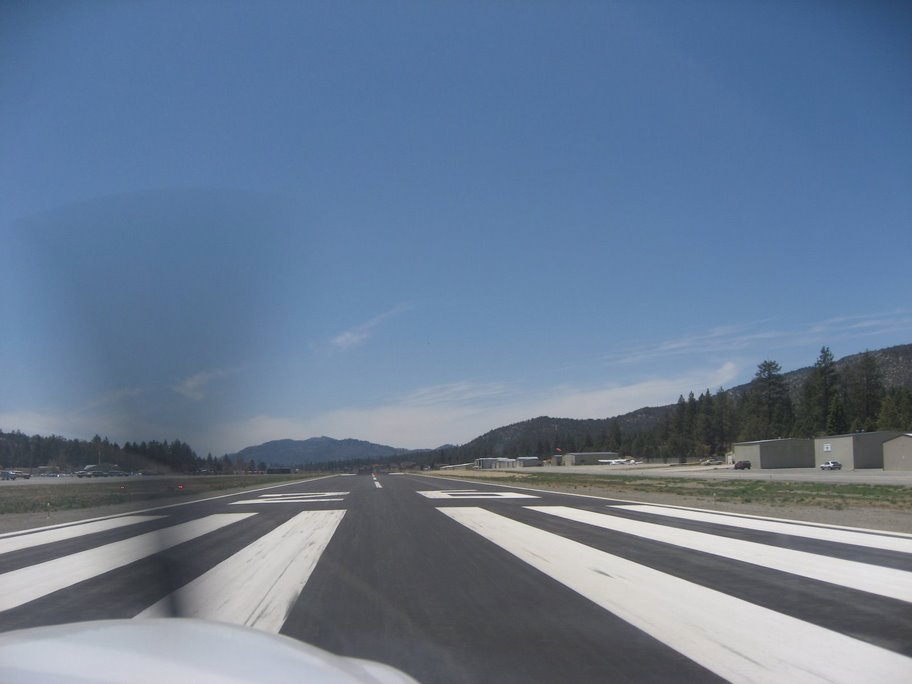 As the smoke gradually clears our true summer temperatures are returning. From now through October, when obtaining our current weather we can expect to hear remarks regarding density altitude. Density altitude is not a height reference, rather it is an index to airplane performance. Simply put, it is the altitude the airplane thinks it is at.

Air density is reduced by decreased air pressure, increased temperature and increased humidity. Reduced air density causes the airplane to perform as if it were at a higher, i.e. thinner, altitude. A reduction in air density reduces aerodynamic lift as the light air exerts less force on the airfoil. It reduces thrust because the propeller gets less grip on the light air, and reduces the power output of the engine due to reduced air to support combustion. Increased density altitude results in a longer take-off run, reduced rate of climb, reduced en route service ceiling, and longer landing rolls. We need thorough preplanning and specific techniques to fly safely in high density altitude conditions.

High density altitude conditions can be hazardous enough to require swapping magneto keys for car keys. When the air heats up, some hazards, such as thunderstorms, will warrant a delay or diversion. Hot weather often generates strong surface winds. Mountainous terrains create localized wind flows. Because the airplane is already operating with reduced capability it may not have the reserve of control, lift, or power needed to compensate for any gusty crosswinds.

In planning for a high density altitude jaunt:

Proper planning prior to entering the cockpit will give an understanding of your airplane's performance and give you a planned out if that diminished performance is not met. Specific techniques for high density altitude flight are best learned and practiced with a flight instructor. Schedule your favorite for some foothill or mountain flying practice.

Our story so far - Chuck Cali has been tasked with ferrying a T206 from Massachussets to Jamaica. Equipped with a G1000, the late model T206 is a most competent airplane. However, the weather on the east coast has taken a turn for the thundery worse as Chuck sets out from Boston. After navigating the NY airspace, avoiding thunderstorms while appeasing ATC, he refuels at Salisbury, MD before pushing on to Norfolk, VA for the first night's stop. 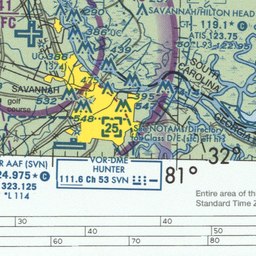 We launched around eight the next morning. The skies were clear and the temperatures almost cool. Our destination was Savannah, Georgia. This would hopefully be our first and only fuel stop on our way to Ft. Lauderdale, Florida.

The weather briefer gave us the same information we'd been hearing. Hot, humid, hazy and scattered thunder storms over our route. At eight in the morning, as the sun and N65556 ascended, there were already cumulus clouds forming... squadrons of them, building in size and height, threatening to grow and challenge some other pilot later in the day.

Of more concern was a small but pesky low-pressure system centered due south of Miami that had been spinning there for the last couple of days, not really going anywhere or away. It was not what I would call a huge storm, just a meteorological annoyance, its influence was being felt in all of southern Florida from Tampa to Key West. Despite my best wishful thinking, there seemed little hope of it moving out of our way by early evening. We would have to deal with it as we neared Ft. Lauderdale.

We were at 10,000 feet VFR, over the growing cumuli and GPS direct Savannah. As we climbed we noted the winds aloft again to be significant. Anders, already bored, (he was in the left seat but I had the autopilot flying) was requesting his first experience of operating in thin air and sucking oxygen. Perhaps, we joked, we will find tail winds up high.

Since we were turbo charged and O2 equipped, how could I deny him? I did fore-warn him this was not as much fun as it seemed - those masks not being all that comfortable - as we set the autopilot to 16,000 feet and began our climb.

On our way up Anders figured out how to use the XM radio. We found an excellent comedy channel. Most humorous was the built in capability of the G1000 to squelch the XM when ATC or we were talking. Predictably, ATC always cut in during the delivery of the punch lines, so we decided on Jazz as we winged our way toward Savannah.

With jazz playing in the headsets, the autopilot flying, we had plenty of time to watch what the low-pressure system south of Miami was doing. Nexrad was depicting weak frontal like activity from the onshore flow creating lots of green with yellow and red spreading across southern Florida.

How cool is that? When I started flying weather - many years ago - I could only dream of such capability. Indeed there were times I would have traded all my worldly possessions just to glimpse inside a distant sky.

Today over the rolling Carolina hills, while still almost 1000 miles away, I could watch the weather over southern Florida. Moreover, my young student and I could plan in ways never before available to us lowly GA pilots tooling around dodging the weather.

Unlike our brethren - turbo-fanning in the mid thirties above the hot humid chop below - we were VFR, enjoying the view, the music and loving it. Not worried at all by the perpetual doom and gloom reports from flight service specialists - formerly a pilot's only source of in flight weather information - we could look out the window and seemingly see the future.

By the time, sucking O2 got old; the cumulus clouds that were below, are now looking very cumulonimbus like. And, we didn't have to look down to see them.

So, 60 miles out, we started our VFR descent toward Savannah picking our way around towering clouds that were - fortunately for us - well spaced.

While N65556 was being refueled, Anders and I - enjoying the air-conditioned FBO - happened across some delicious home baked Chocolate Chip Cookies. A wonderful adventure in a great airplane equipped with the latest high tech avionics, air-conditioning and homemade cookies. It was, for the moment, good to be us. Still, we had southern Florida to deal with before tonight's steak dinner.

The following charts will change soon -

The ever popular Fred Thomas Presents continues in September with The Battle of Britain. September also brings a new serial - Captain Midnight. As usual, the movies are free, but we would appreciate a donation for the light supper that we provide. The movie schedule is posted on our web site, so check it out. See you at the movies! 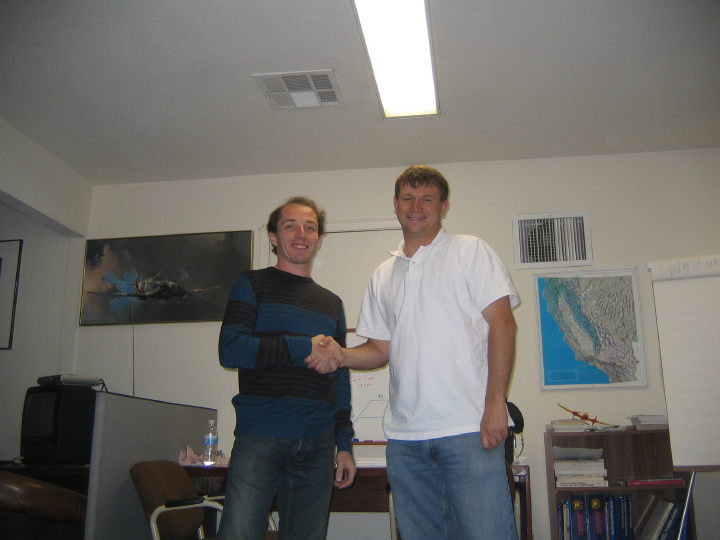 Pierre-Alexandre Masse soloed just before press time for the last newsletter, too late for his photo to appear. So here it is! 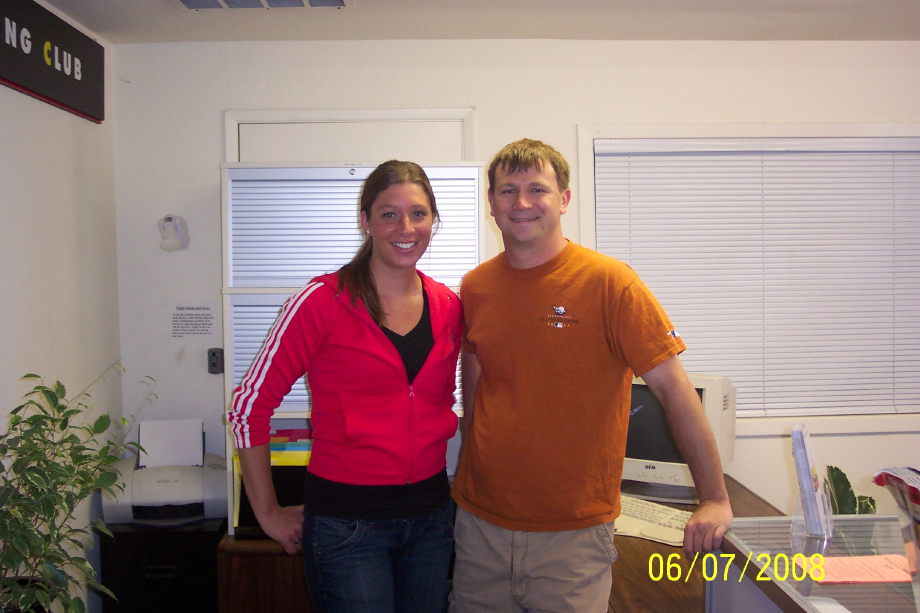 Tami Ransom soloed in N94565. Her instructor is Rich Prillinger. 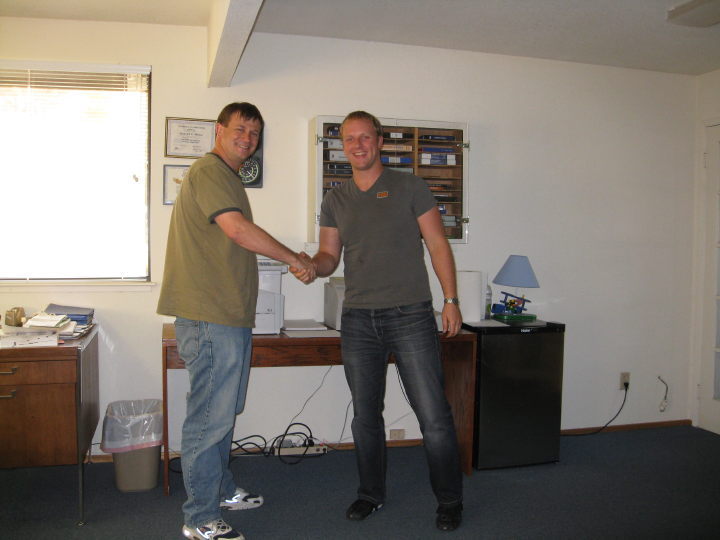