What Goes Round - By Chuck Cali

After a century of flying, we still live at a moment of emergence. For us the emergence has been given meaning because we can think about it, and can perhaps understand the nature of our liberation. That liberation however, has been hard won. If flights greatest gift is to let us look around, then perhaps its greatest challenge has been understanding the mechanical wings that allow us to fly.

From the beginning of man's exploration of powered flight, he has learned much about flying machines, how they must work and be flown. For the most part, this knowledge was gleaned from his mistakes. Many died learning. Today a huge bureaucracy exists (NTSB) to examine airplane crashes, and if possible, learn about the probable causes. All this learning has meaning and from it come safer airplanes, better air traffic control and more informed pilots. Simply stated, we have and continue to learn from the misfortunes of others.

Those of you who've known and flown with me are aware that I am not above critiquing my flights. I have as much ego as the next pilot but truly believe that every time I fly I learn.

It was Mother's day. My wonderful wife and mother of our children requested for her Mother's day celebration, a flight to Columbia. How good it that? I get to fly, she gets her wish and the kids get to pan for gold. Additionally, we would have lunch.

I booked the Bonanza and thanked my lucky stars. Mother's day dawned a beautiful California day. I had just finished the preflight inspection when Mom and the kids showed up. The flight was smooth. At 5500 feet level and trimmed we were doing 165 knots across the ground. I was smiling. Columbia is one my favorite destinations and I had flown in here countless times before. Life was good.

Over Oakdale my wife, an active pilot before children and career, was intently studying the Sectional. She stated the field elevation at Columbia was 975 feet. I hadn't asked and don't know why she thought it important to say. I acknowledged with the usual husbandly response, OK, thanks dear. We were getting close to starting down and my mind was miles ahead of the airplane. I thought.

At Bonanza speeds, one is in range of Columbia 25 miles out. I started down enjoying the 170+ knots showing on the Loran and chose 2500 feet as my target altitude. Asking my wife (still intently studying the chart) what the CTAF frequency was, all I heard was confused silence. She handed me the chart and was barely able to read (I did not have my reading glasses with me) the CTAF was 122.975. Gut feeling here, something very familiar about that number I thought.

The airport came into view as Unicom was advising either paved runway. I opted for left traffic and the up hill landing.

The gear was down and locked by now. The airspeed was bleeding nicely into the white arc. Right on the profile I've taught hundreds of times. Turning onto the downwind, I noticed I could count roof tiles on the houses slipping by, way to close. Still bewildered somewhat about the Bonanza's altitude, agl, I continued to focus on the job at hand, which turned out to be dodging trees while turning left base. It was suddenly amazingly quiet in the airplane, except for my son, who thought this was very cool.

This was not cool at all! It was all embarrassingly clear on left base that I botched my approach planning by not paying enough attention to the field elevation, even though I'd had a gut feeling something was not right. I was now, as they say, using superior skill to overcome poor planning and judgment. Suffice it to say a go around was in order here, which I did. We went around to a normal approach and landing.

As we taxied in, I smiled as I saw the sign that has been above the door of the terminal building for years. Field elevation, 2118 feet above sea level. As fate would have it, my family and I had a great day.

Having had this experience I was compelled to ask, How could this have happened to me? What have I learned and how I can I as a flight instructor share this experience. Obviously, I was complacent. I did not precisely plan my arrival. In deed, I had been here so many times; I did not even give it a thought.

This does make a good case for flight planning. Failing that, a pilot with my experience should have sorted out my gut feeling about the coincidentally similar CTAF and unsolicited field elevation comments bouncing around in my subconscious before getting too close to the ground.

My conclusion, I was operating like I had been to Columbia yesterday. That not being the case, my proficiency was lacking. As an aside, for those of us now in that age group who are somewhat visually challenged, you know, reading the small print, bring your glasses.

First, and absolutely the most important lesson to everyone reading this, is the fact that I did not hesitate to go around. The idea of trying to salvage a landing from a poorly planned approach did not enter my mind though it is likely I could've dragged it in and landed.

The NTSB reporting databases are full of landing accidents. These records indicate that all too often pilots get so focused on landing that the go around doesn't get considered. It is almost as if they must get on the ground. It seems that these pilots know the approach is not good but for some reason let their anxiety take over. Getting on the ground is all that matters.

At this point the pilot and passengers become nothing more than doomed participants in an amusement park ride. Now, that ridiculous cliche, any landing you walk away from is a good one becomes an unspoken reality.

That is so WRONG! Unless you are out of gas, (shame on you) or your engine has stopped and you are dead sticking it in somewhere, that cliche remains ridiculous. A go around is always there for you to use to your advantage as sort of a pressure relief valve. It is not a sign of inferior piloting skill but rather a symbol of your high standards and confidence.

Regardless of your paradigm, a go around is far less embarrassing than smashing up a perfectly good airplane for no good reason. 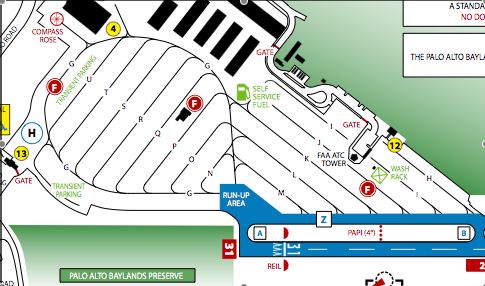 All the taxiways at Palo Alto are being relabelled. This is a work in progress with many of the ground markers being temporary. The changes are significant, so that no longer will you taxi to parking via Delta -- now it is Kilo. The County has printed new Noise Abatement Procedures for all its airports. The one for Palo Alto shows the new taxiway designations.

The controllers have been very helpful during this transition by referencing the taxiway labels as old and new. 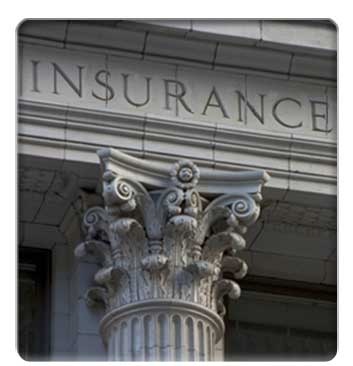 As a pilot you may have been bombarded by offers selling aviation insurance. The most common insurance advertised is Renter's Insurance. As a Sundance member, do you need this?

First, lets look at the insurance carried by Sundance Flying Club. The policy covers incidents and accidents in club airplanes for up to $1,000,000 with $100,000 per seat. Each member is a Named Insured. The other parties named on the policy are the County and (of course) the club.

So, are you, as the pilot, covered by this? The answer simply is yes. As a named insured, you are covered, as are your passengers. If you get a repair bill after an incident, you pass it on to the club. We will pass it on to the insurer. You are not liable for it. No deductable. Nothing.

We will look at other insurance topics in the future as this is a complex subject. Next up, the insurance requirements when flying across the Canadian or Mexican borders.

The San Francisco Terminal and Sectional charts changed on August 30. New ones are available at the office. Remember that the Terminal chart is available to members at no cost.

All IFR charts changed on August 30, as did the AF/D. Of particular note is that the AF/D expanded its coverage to include NM.

The Klamath sectional changed on Sept 27.

Of particular note is that the Low Altitude Enroute charts all changed in their coverage. We now recommend that you normally use L3/4, which covers from Santa Rosa - Marysville south to San Diego. L1/2 now covers San Jose north to the Canadian border.

The upcoming movie schedule may be found on our web site. Our next movie is on November 28, later than normal to avoid Thanksgiving, and is Ice Pilots. Sundance provides a light supper, for which donations are appreciated, but the movie is free to all. So, bring friends and family to the club - third Wednesday of each month. 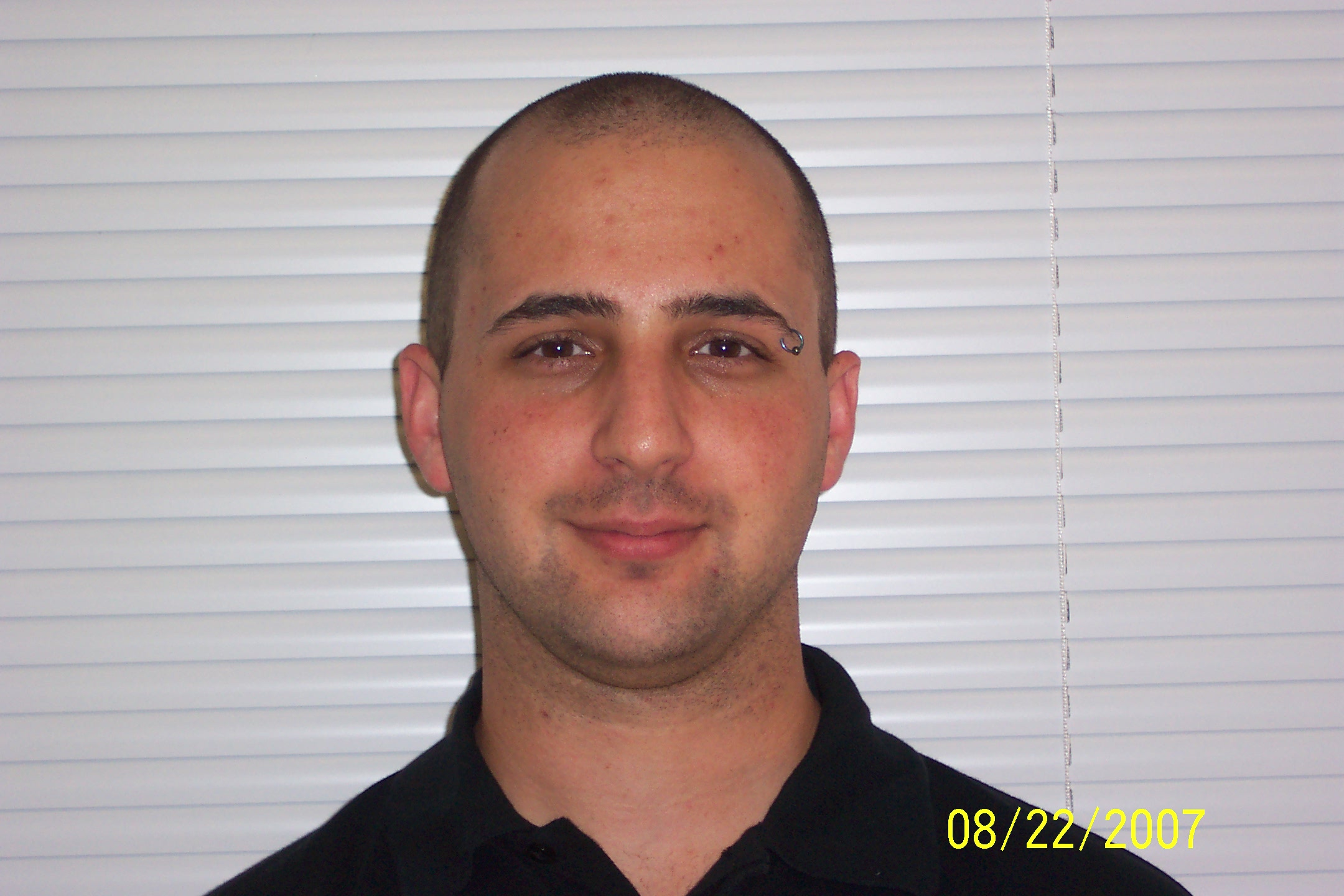 Guy Cohen made his first solo in N738GE. Guy set the goal of going as far towards the PPL as he could in 5 weeks. A number of our instructors worked with him to achieve this. Key though was Jim Long, who provided most of the heavy lifting. 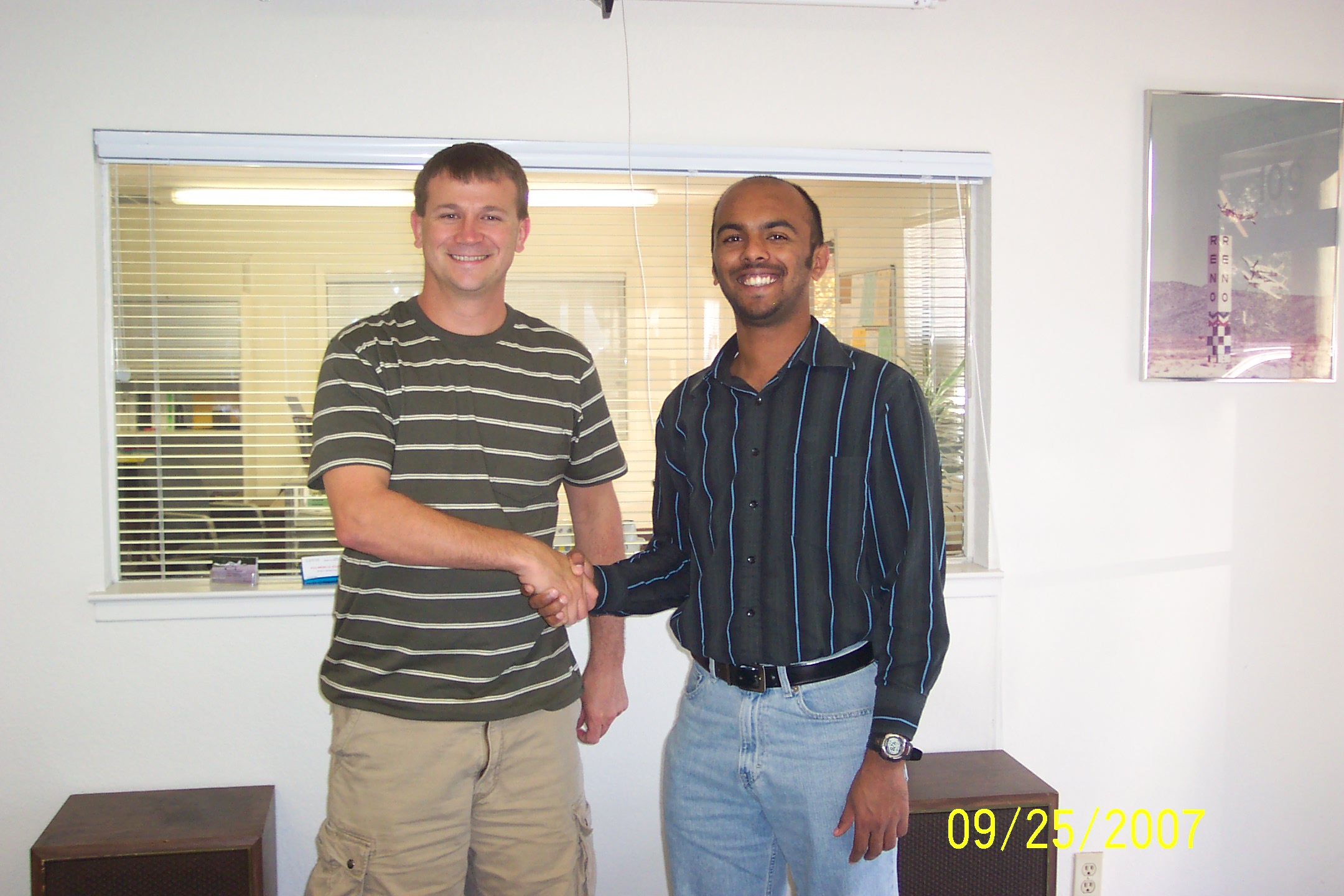 Ram Kumar soloed in N8370U at HWD. Ram is working with Rich Prillinger. 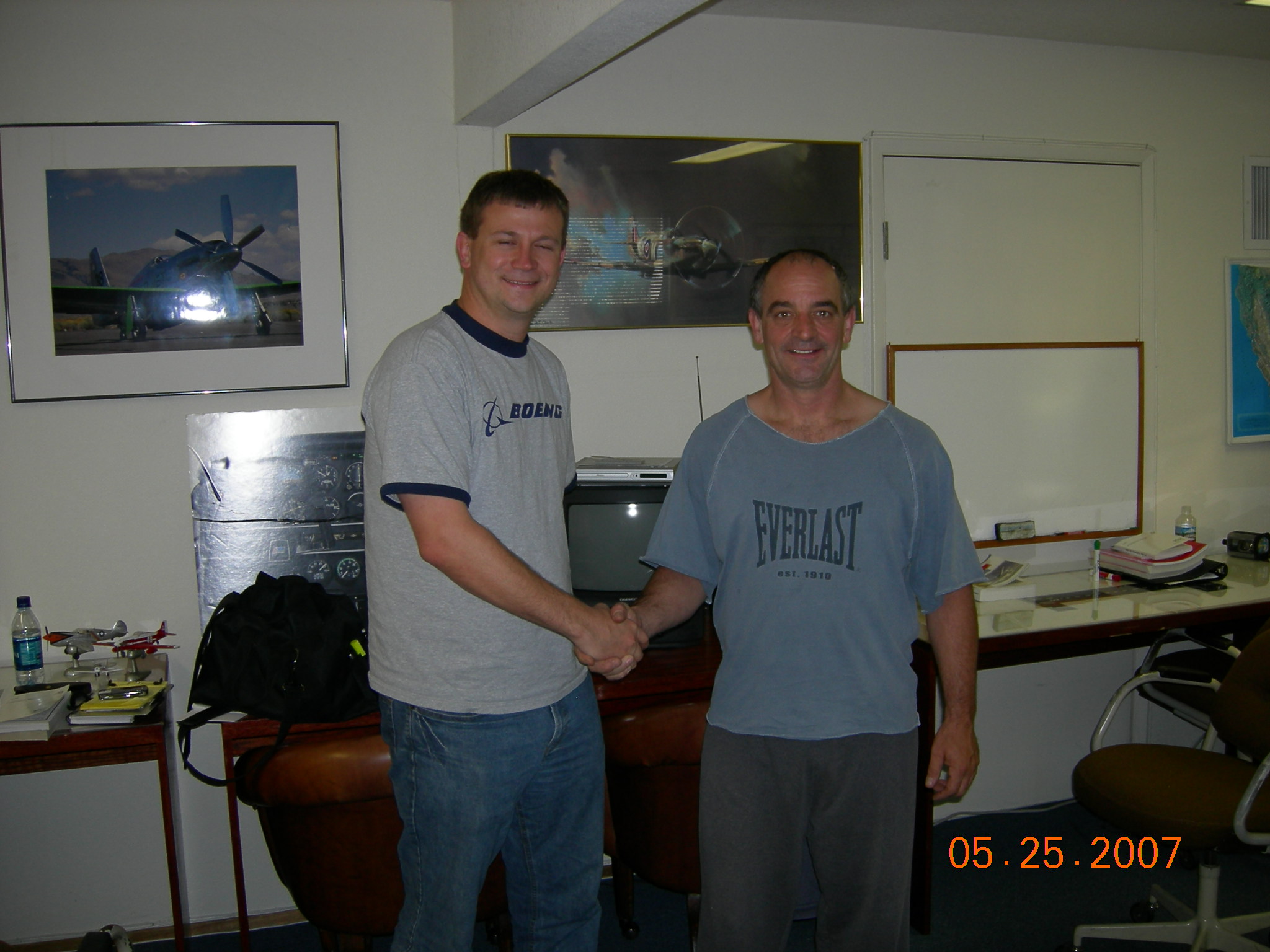 Jim Agua passed his checkride in N94565 on the first attempt. Jim took the ride with Sherry Diamond and is Rich Prillinger's first Private pilot student. Our congratulations to all involved. 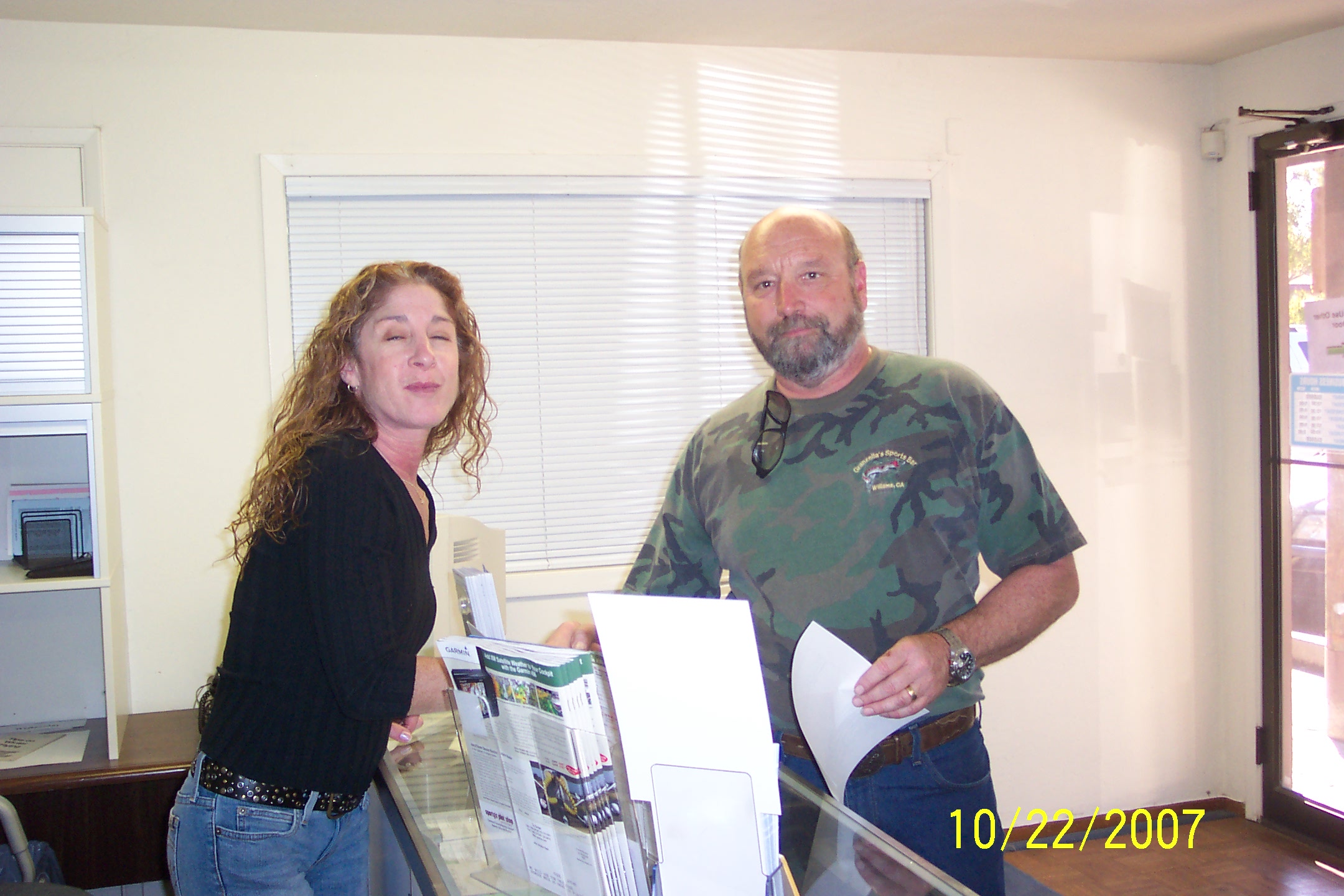 Ken Phillips passed his private checkride on the first attempt. Although not a member of the club, Ken maintains our airplanes. His instructor, Rich Dawson, is a club instructor. Ken's examiner was also Sherry Diamond. 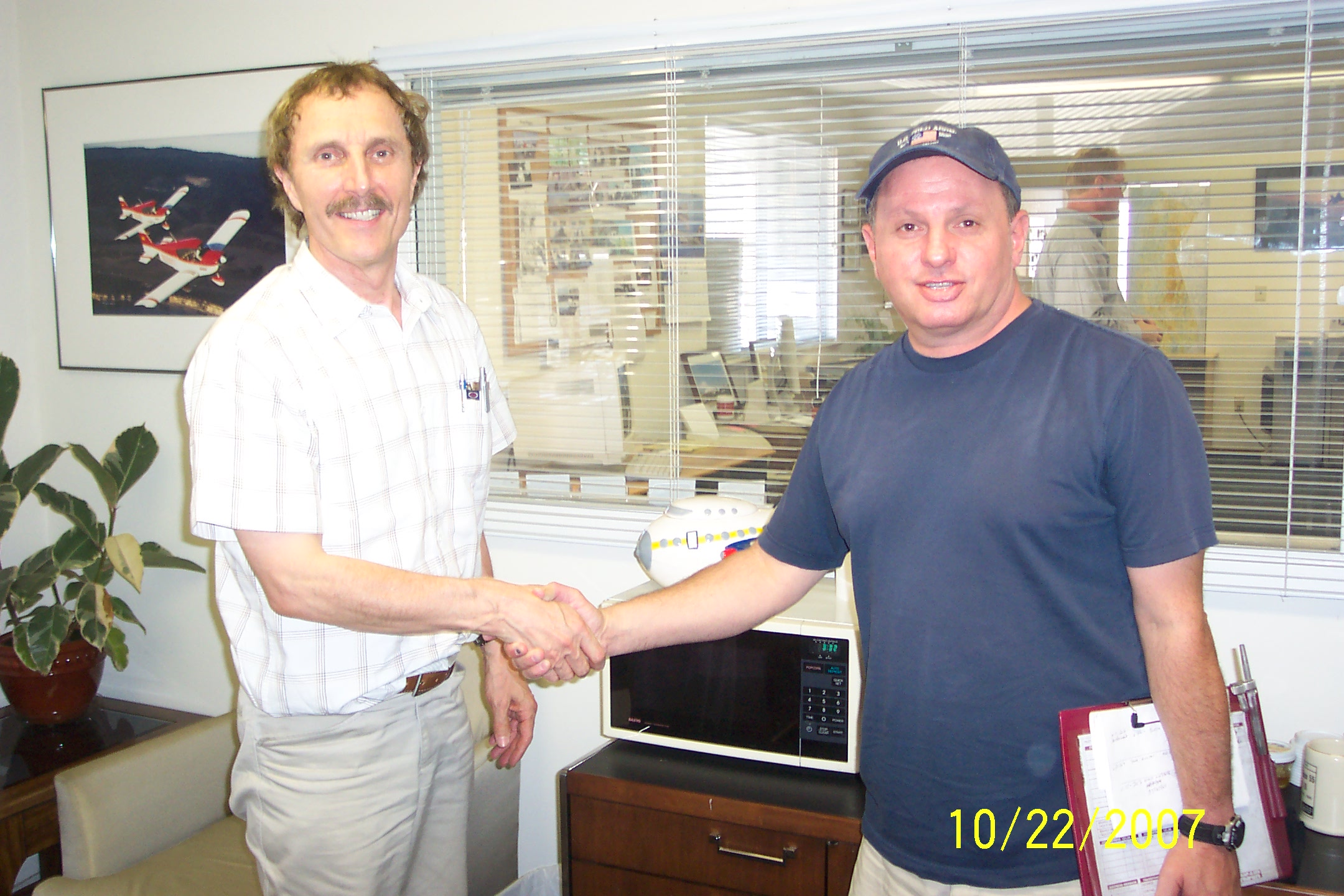 Ernst Hunziker spent just one week flying with Peter Sturdza, but finished with a successful Commercial Checkride. Mike Shiflett was the examiner.

Although not wishing to obtain a rating, Stephane Ensminger spent the summer flying with Sundance. He was able to add a great deal of US flying experience to his French PPL logbook.

With owner Jim Stair relocating to Austin, TX, our 182 (N3518F) has left the club. While we are sad to see this fine airplane go, we all wish Jim the best in his challenging new position in Texas.

Our newest airplane on-line is also the oldest in our fleet. N8370U is a 1965 C172F. It is noteworthy because rather than the familiar Lycoming O-320 engine, this model is powered by a 150 hp Continental O-300. This engine is a 6-cylinder one, so that vibration is quite a bit less than the later 4-cylinder Lycomings. N8370U is also lighter than the N models, so has a greater useful load. The Continental engine and the lower weight combine to give a lower fuel burn as well.This is an airplane well worth checking out!

What our Members are Doing

So you have just completed a rating and are wondering - what next? Each newsletter, we will look at what some of our members are doing. If you have a flying mission, let us know and we will share it with the club.

With the weight of running the club off his shoulders, Chuck has been flying more, and certainly enjoying it. Recently he undertook a true flying adventure, ferrying a Cessna 210 from Boston to Jamaica. Look for his diary of this flight in a future newsletter.