A reminder that we are running the Introduction to Aspen PFD course again this Thursday. Details and enrollment are available on our web site. 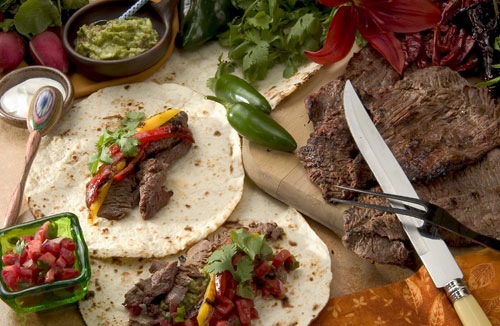 We will be barbequeing Carne Asada with all the fixings, so come for lunch and hangar flying. We will have a couple of the newer additions to the club fleet nearby so you can peek inside.

Rich Prillinger and Peter Sturdza have now been checked out by Fred Thomas in our Cherokee 6. Any of these 3 CFIs can now check you out as well. If you are planning on a flying vacation, plan on a checkout and take N600JG! At the cureent AvGas prices you can hardly afford not to do so.

It seems strange to realise that this time last year we were looking at $5.00 per gallon AvGas prices. Now we are wondering just how low they can go; will the price go below $3.00 this year? We have handled the continuing drop in the price of AvGas by turning the Fuel Surchrage into a Fuel Surcharge/Rebate so that we are not having to juggle the base rental rates all the time. Each time we get a new AvGas price we simply change the Fuel Rebate, and down goes your hourly rate.

With AvGas being so volatile (bad pun) there are a few things to remember.

Firstly, if you are refueling remotely, check the local prices and plan your refueling stops accordingly. Remember that the lowest published prices will be the most active in sales, and so the current price may even be lower. High priced FBOs will be selling less gas and will be left behind in pricing.

Secondly, our hourly rates are significantly lower than on the rate sheet. When AvGas stabilises we will adjust our rates to suit, so it is worth checking the raste calculator in the airplane book to see how little you will be paying for your flight.

With winter coming, we can expect not only colder and wet weather, but also occasional strong and gusty winds. An airplane has lots of surface area that the wind can act upon. When the airplane is not tied doom securely, that gusty wind can really bounce it around. It can bounce the wings up and down and move the whole airplane fore and aft. When there is such movement, the ropes are jerked and knots can become loosened, the ropes snapped, and the airplane blown right out of its parking place. This, of courses would mean serious damage to not just one airplane but to several.

So as we approach this season, lets review our tie down procedures. The primary concern must be to keep the airplane from moving in the wind. Second, in order for the ropes to stay tight, the front ropes must be pulling forward on the airplane and the tail rope pulling rearward, sort of like a tripod effect. Third, the knots must hold securely and not slip.

it is important to position the airplane correctly. Push it back into the parking place so that the wing tie down rings are exactly abeam (opposite) the ground anchor, as shown in Figure 1.

Next, tie both wing ropes so they are snug with an interlocking half hitch knot. Refer to Figure 2 for tying the knot. 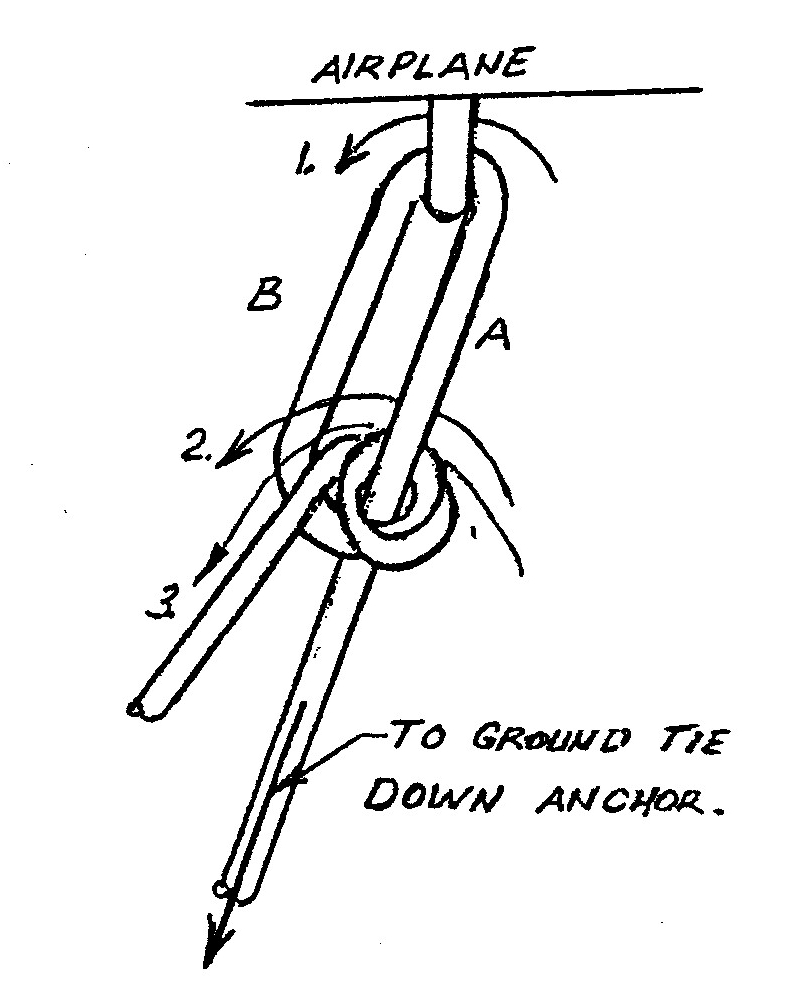 Bring the rope through the airplane's tie down ring, as shown by arrow 1, and hold part B snug while tying the rest of the knot. Tie the first knot about six inches down from the top. The end of the rope now swings around the part going to the ground, labeled A, and out between A and B, as shown by arrow 2. Swing the end around part A again, as shown by arrow 3. Pull the end tight and snap it between the first loop and part B. When this is tied, make one more knot just like the fast one but about six inches below it. Finish this off with a simple overhand knot to secure the loose end.

When one wing is tied down, go to the other one and tie it down in the same manner.

Now move to the tail rope. Put the end through the airplane's tie down ring, as shown at C in Figure 1. Get a good grip on rope C (wrap it around your hand once). Then, with the rope, pull the airplane rearward as fast and far as you can. The movement and momentum of the airplane will tighten the front ropes! Be sure to keep the pull on the rope. Move one hand up rope C to within about six inches of the tail ring and hold the tension there. While holding this tight, tie 2 interlocking half hitches, like you did on the front ropes.

you should have the airplane tied down with the front ropes leaning rearward and the tail rope leaning forward and a1l three under tension, as shown in Figure 3.

On low wing airplanes, you should first position the airplane with the tail tie down ring close to the tail ground anchor, tie the tail rope, and then pull the airplane forward with the wing ropes to tighten them all.

Our story so far - Chuck Cali has been tasked with ferrying a T206 from Massachussets to Jamaica. Equipped with a G1000, the late model T206 is a most competent airplane. However, the weather on the east coast has taken a turn for the thundery worse . Discovering the utility of XM Nexrad weather has enabled Chuck to make it as far as Gainesville, FL. But will it enable him to get to Ft. Lauderdale? 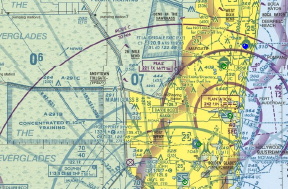 Heading southwest as we arrived over Gainesville, our plan had been to turn south, fly direct Orlando, direct Ft. Lauderdale.

As Anders and I looked south, what we saw would make even St. Exupery speechless. A rising and falling wall of cumulonimbus clouds, brilliantly illuminated by a western sun, formed a beautiful but seemingly impenetrable barrier to Orlando.

Our turbo charged airplane could likely get high enough - our propellers grabbing desperately at thin air - to pick our way around all but the highest cloud formations.

We could stay at our current altitude and 'punch though'. Airplanes are the most weather-worthy of vehicles, strong and capable beyond even the imagination of their pilots. When options ran out, this knowledge was the 'inside trick' used by ancient pelicans during the pioneering days of airliners as transportation.

In the not so distant past, a friend, more experienced than I in the world of storm negotiations, took me to the interior of such barriers. And there were many a bumpy ride to be sure. At times, seeing the instruments proved a challenge. But, survival was never a question. Our mental calisthenics trained us against disaster. We chased weather as exercise.

This was not our mission today. My young charge had many steps to climb on his journey as a pilot. He was learning how VFR pilots stay alive, and arrives.

An artful negotiator would consider these options:

With Nexrad, we had the 411 on the weather to the south. Beautiful views not withstanding, all indications were that upon reaching Tampa we would have a pretty route east to Ft. Lauderdale.

With Anders flying, I had the straight-ahead view of the MFD. The new plan, really just a modification of the old out-flank the worst weather, was to continue southwest to Tampa an hour away. Enroute, we would decide how to get to Ft. Lauderdale, or at least close should my forecasting prove inaccurate.

As always, we monitored the approach control frequencies. Our decision to stay VFR seemed quite prudent as we coincidentally watched and listened to a T210 Pilot flying IFR try to negotiate with the Tampa approach controllers to stay out of the clouds while every piece of heavy metal with jet engines on it did the same thing.

In one of those flying twists of fate, we found the T210 at our 10 o'clock low. Anders and I watched and listened as time after time ATC tried to vector the T210 into some huge build-ups. Time after time, we heard the pilot try to work his way out of the vector. It was sad really that this fellow would rather risk his neck and his airplane to stay IFR rather than cancel and enjoy the freedom we had just 500 feet above him.

Arriving at 12,500 feet just east of Tampa, Nexrad was refreshing regularly. We had successfully out flanked the green, yellow and red. With scattered showers to the east and lots of space between them, we descended to 2000 feet turned east and dashed across Alligator Alley for a straight in to runway 8 at Ft. Lauderdale Executive Airport.

As we taxied into Banyan Air services, we glanced at each other and knowingly, nodded our heads. We had picked our way from Norfolk, VA to Ft. Lauderdale, by slipping in a few miles at a time, judging and probing the clouds, moving higher and lower, turning and detouring, not surrendering.

Anders had started this trip a young man, eager to fly his new airplane; ignorant of the world he was entering. Watching him now - run through the shut down checklist - it was clear he had emerged from inside the sky, still a young man but, wizened by the experience.

Nevertheless, this was not the weather flying experience of ancient pelicans. Though we flew the same low altitudes where most of the weather is, those old birds had learned to read the clouds and smell the air. They entered storm-flying negotiations from within their monastic cells. Using a different skill set, their fates tempted with the knowledge that they did not know what the weather was doing beyond what they could see.

We did know, and that changed everything. With such technically advanced avionics, weather pilots today - still operating in the cloistered environs of the cockpit - employ storm negotiations only dreamed of a generation ago. And that's a good thing.

For now it was time to meet my Jamaican counterpart. We had just gotten word that the Jamaican pilot assigned to N65556 was in Ft Lauderdale and wanted to fly with us to Kingston. Problem was, there were only two available seats aboard 556. Porterhouse anyone?

Fred has wrapped another stellar set of movies evenings. He is busy reviewing his archives for the next movie season, which will start early next year. As soon as the selection is made we will bring you the result.

Laura del Favero successfuly completed her checkride in 90R despite having to postpone the flight for bad weather. In the end she had to fly to RHV to meet the examiner. Jared Carbone was her instructor.