The price of 100LL has hit $5.00/gallon! We have not changed our airplane rental rates for a long time, but have adjusted the fuel surcharge to account for changes in fuel prices. Now that Avgas has changed so much from our original benchmark, we have changed the rate so as to include the current fuel surcharge, and set the latter back to zero, starting April 1st. You are not paying additional for rental, just that the fuel surcharge has been rolled into it. The surcharge has gone to zero until Avgas goes up again.

We have added Discover card to Visa and Mastercard as one of the ways to pay for flights and other club services. If you wish to substitute it for your current billing method Just present your card and we will make the change.

The FAA has just released a new safety chart summarizing safe practices when taxiing. One of the more important sections of this chart covers the requirements when crossing runways when taxiing to the active runway. We do not have this situation at Palo Alto, but many of our local airports do. Ones that come to mind are SAC and SNS. The safety chart is a pdf suitable for downloading and printing. We encourage all members to do this.

Our Bonanza, N7201N, will be absent for some weeks. It is off getting a new avionics suite. The new panel will be centered around a new glass Primary Flight Display, or PFD. This unit replaces the AI and HSI and is capable of much more than the old steam gauges. The radio stack is being replaced with a Garmin 430W GPS/Nav/Comm, a new Audio panel, a Garmin SL30 Nav/Comm in the #2 slot, and a new transponder. All Bonanza pilots will need to get a new checkout, as most of the functions of the instruments will have changed. More details as they develop!

We intend this column to be periodic. In it our instructors will discuss items of safety that concern them 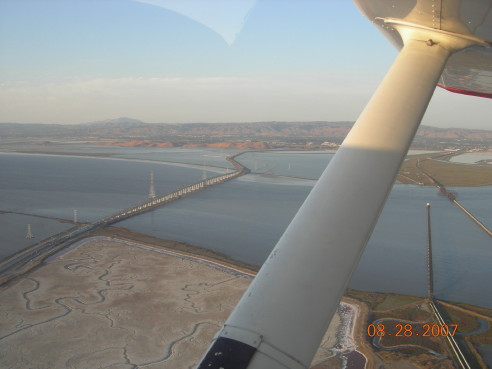 What do you plan to do if your engine quits just after takeoff? We are all taught that if we experience an engine failure right after takeoff, land straight ahead. But is this smart at PAO? Should we, instead, try to turn around and land on the runway behind us? What altitude do we have to be at to make a safe return?

There are a number of factors to consider here.

So, as you can see, it is not a simple question. Happily, there is an easy way to discover what you should do - fly with an instructor and try the turn-back maneuver at altitude. You will then know for that airplane how much altitude you will need to return to the runway. If you lose the engine below this altitude, then simply land straight ahead!

As promised, we bring you part two of Chuck's excellent flying adventure. Again, for the newsletter, we have edited the text for brevity. The full text appears on our web site.

Our story so far - Chuck Cali has been tasked with ferrying a T206 from Massachussets to Jamaica. Equipped with a G1000, the late model T206 is a most competent airplane. However, the weather on the east coast has taken a turn for the thundery worse as Chuck sets out from Boston. We left him at 10000 feet in the NYC airspace, being vectored towards the biggest CB he has ever seen ...

Sitting in the left seat, and trying to view the Nexrad image on the MFD in sun and shade proved more difficult than Richard Collins ever mentioned in his On Top series. Moreover, my student, sitting in the right seat, was making an effort to deal with frequency and routing changes, valiantly trying to be my first officer, albeit, with no experience.

He just did not understand ATC jargon or have any experience in the IFR system, creating this question/answer environment that was increasing workload for me. Fortunately, he is quite proficient at knob spinning, and on the G1000, proficient knob spinning is paramount.

Trying to keep ATC from flying us into thunderstorms, making sure my helper was not helping wrong, resolving the Nexrad discrepancy and hand flying the airplane was knocking rust off my IFR skills at an amazing rate. Here I must pay tribute to the G1000 PFD, for it simplified scanning the instruments and as such reduced my workload significantly.

Since my first IFR lesson, I've learned never to trust the old round gauge gyros. Betrayal is their middle name. Relax for a second and over the spiral precipice you fall. Ironically, while scanning that glass PFD, I never gave betrayal a thought. During a break in the fog of IFR, I was able to ascertain that the Nexrad was not refreshing. We were looking at old information and it was getting older just when we needed new. No warning, no flag, just a small window displaying the time since refresh.

This seems like a good time to mention that a capable airplane, an instrument rating and a G1000 does not automatically qualify one to tackle weather conditions such as we were seeing this day. Indeed, my weather flying experience was called into play because in a manner of speaking the G1000 let me down when I needed it the most.

And so it went on our way to KISO. The one forecast our briefer got wrong however were the winds aloft. Now that we had sorted out our avionics issues, established a relationship with ATC and divided the cockpit workload, we began to suspect that we were not getting anywhere very fast. Once again the G1000 MFD paid for itself informing us-via another little window-that we were facing 40+ knot headwinds. If the amount of time we were on frequency with New York controllers were not enough, comparing the fuel gauges with the distance to and ETA on the GPS confirmed our suspicions. We did not have the fuel to reach Kinston ...

San Francisco sectional and terminal charts changed on March 13. As usual, these are available at the club. The terminal chart is, again, free to members for the asking.

Klamath sectional will change on April 10.

The ever popular Fred Thomas Presents continues in April with the much anticipated Tora Tora Tora (even though Fred will be sailing the Panama Canal at the time!). As usual, the movies are free, but we would appreciate a donation for the light supper that we provide. The movie schedule is posted on our web site, so check it out. See you at the movies! 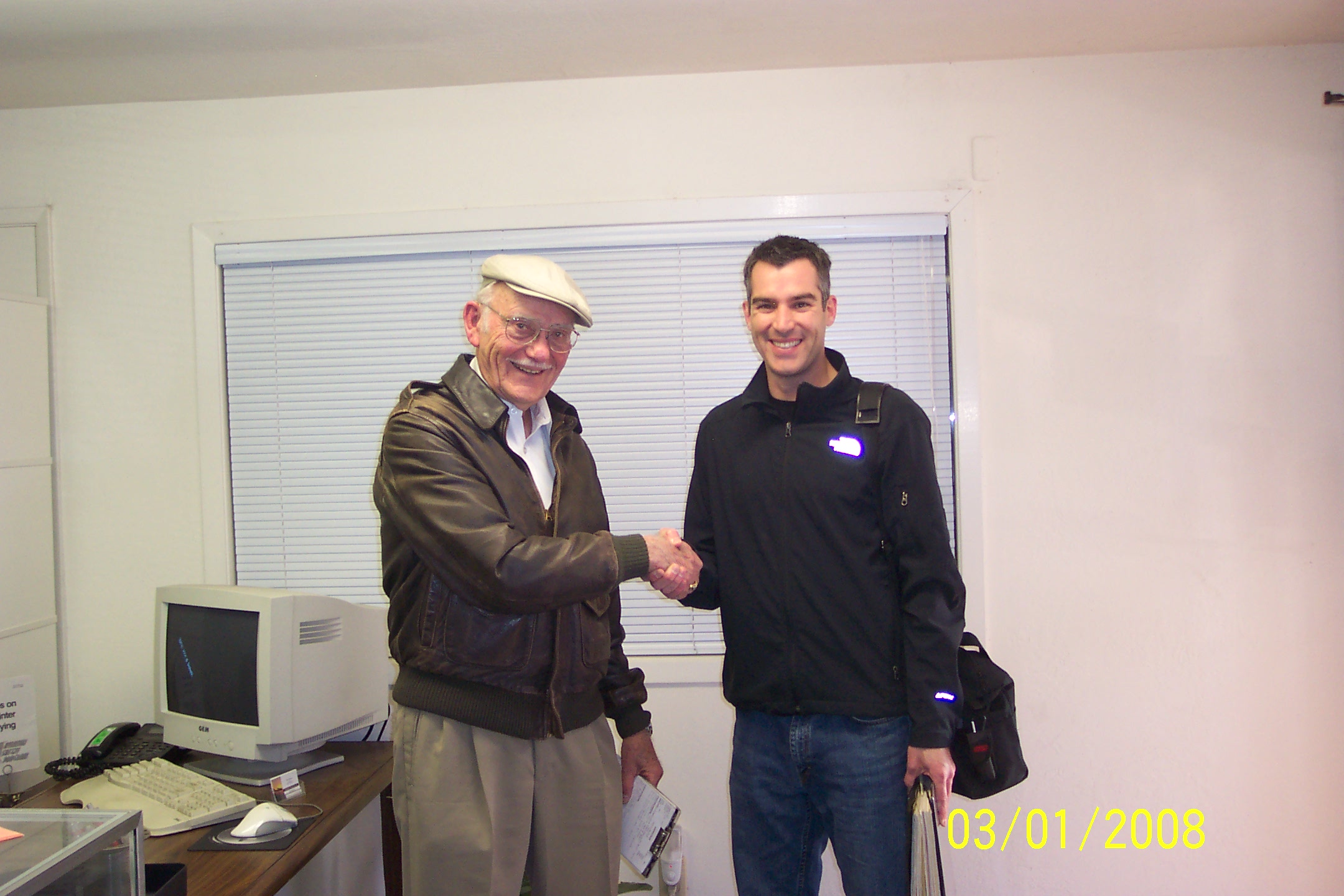 Justin Dawkins soloed in N8256E. His instructor is Ralph Richardson. 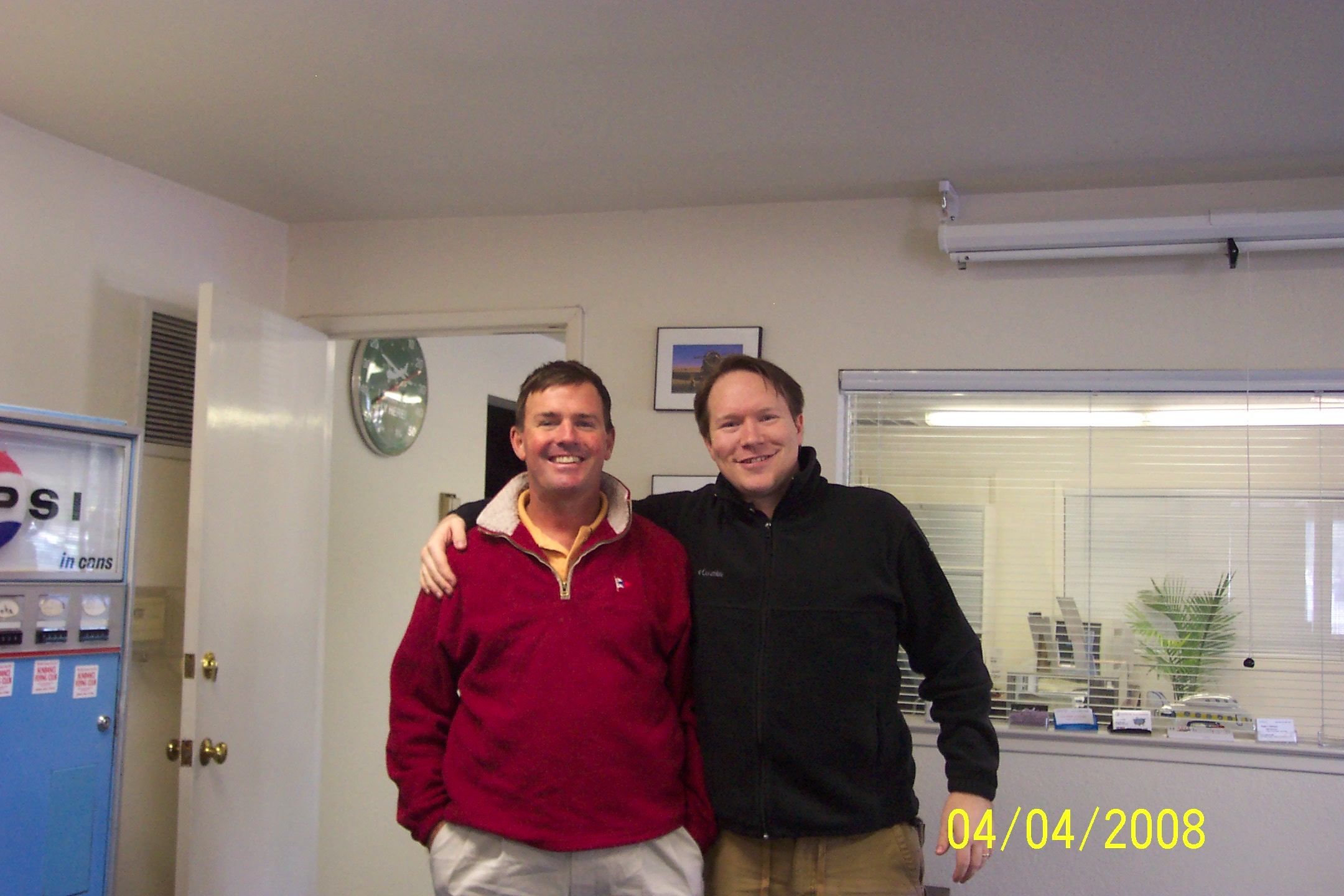 Ian Hill soloed in N94565. His instructor is Bill Donovan. 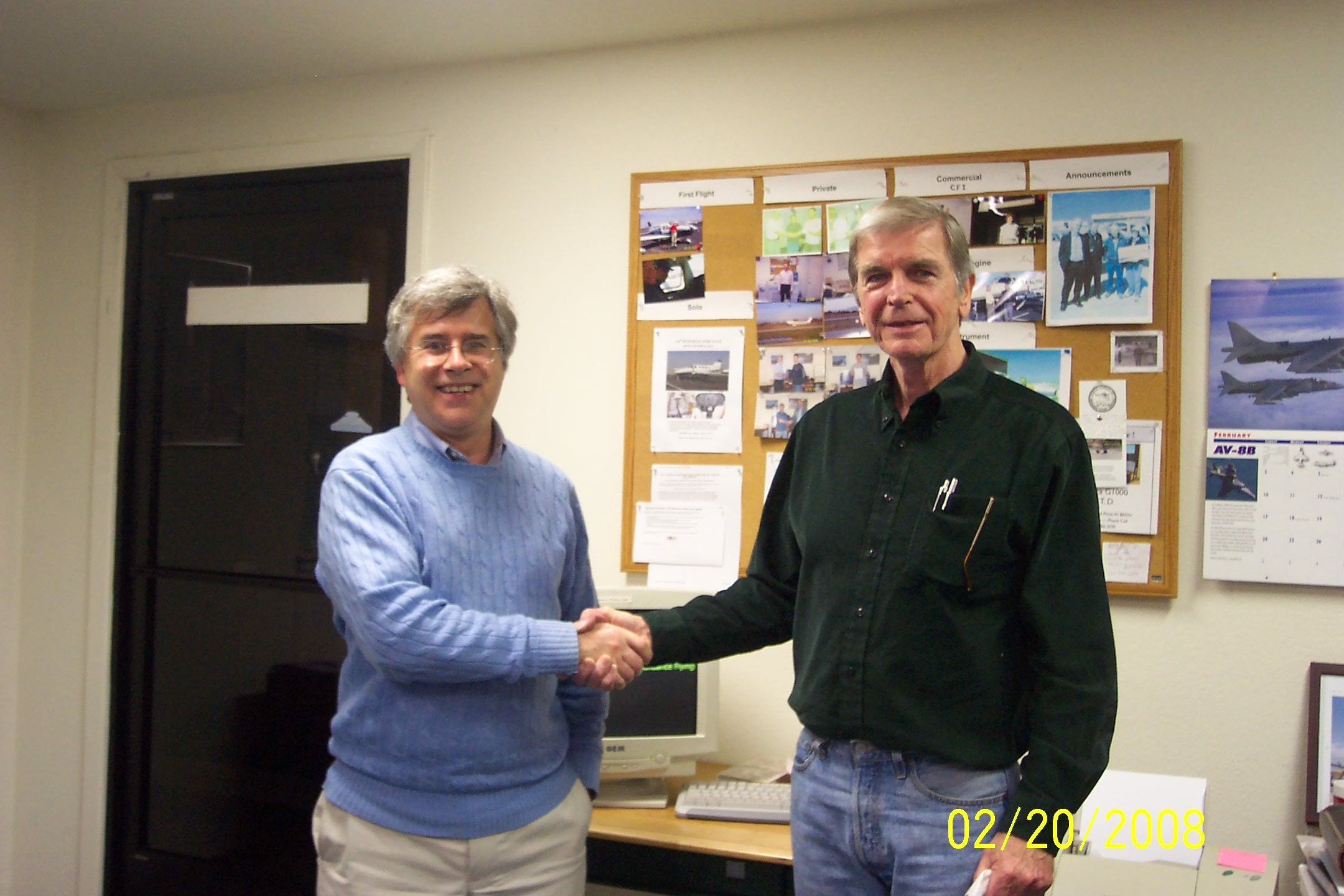 Paul Waring had a successful checkride in N94565. Paul is one of Fred Thomas's students, and is now working with Fred to spread his wings into the C172s. Sherry Diamond was the examiner. 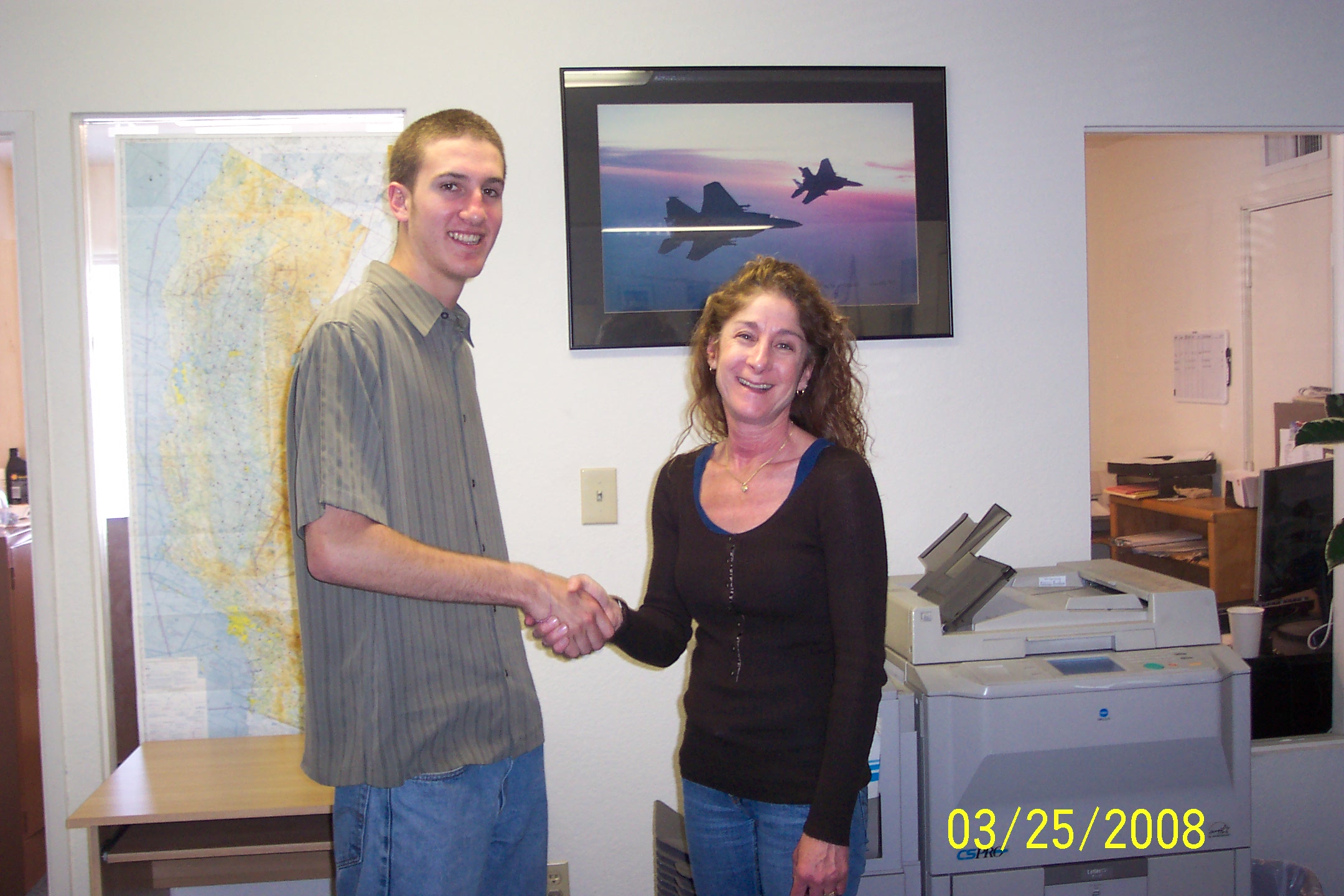 Zach Lenox gained his certificate in N8256E, training with his father, Bob. Sherry Diamond was the examiner. 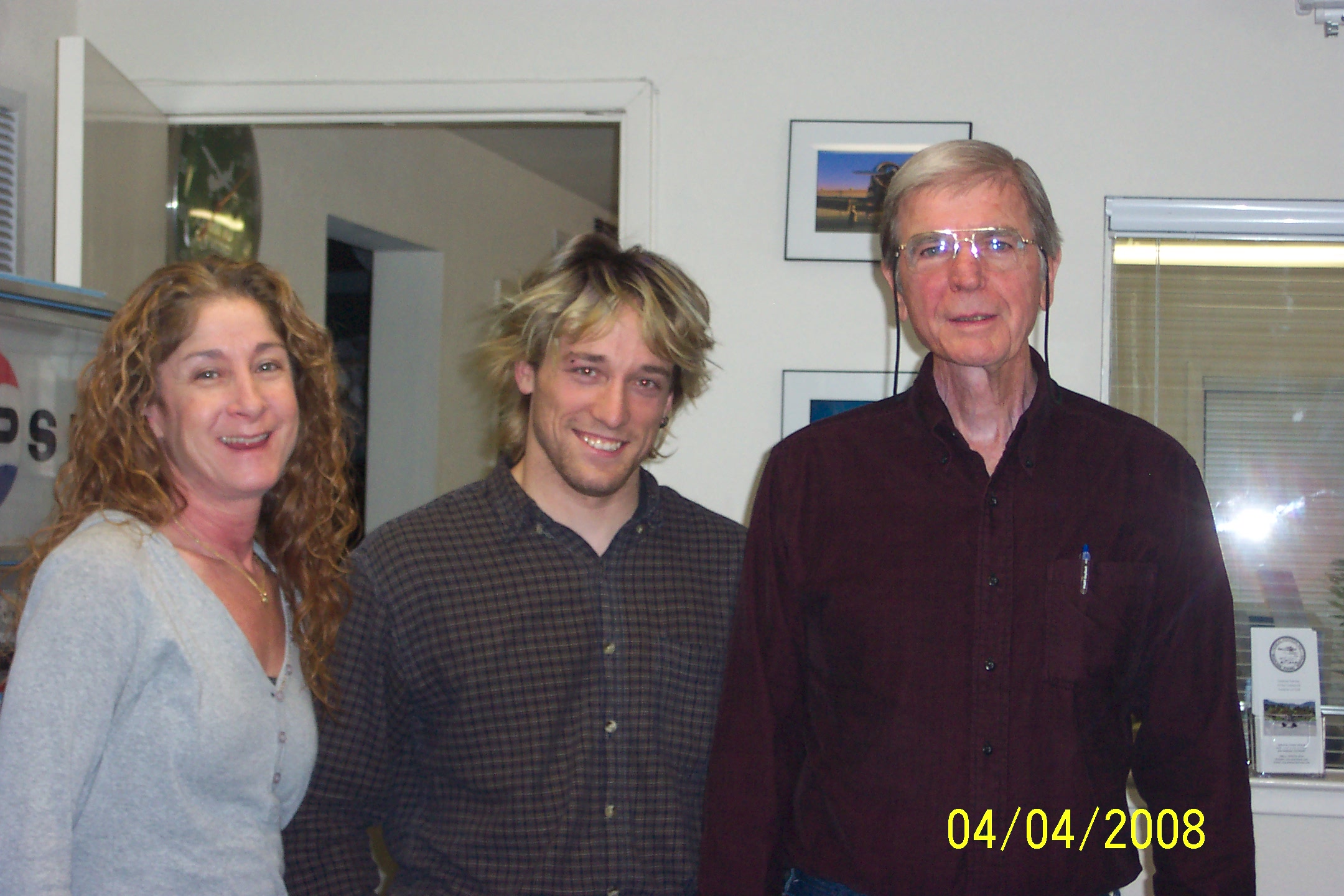 Griffin McKinney spent the last month working on his Instrument rating in N8256E. Despite bouncing the examiner all round the sky in turbulent conditions, Griffin has earned the right to fly in the clouds without his instructor, Fred Thomas. Sherry Diamond was the (shaken) examiner. 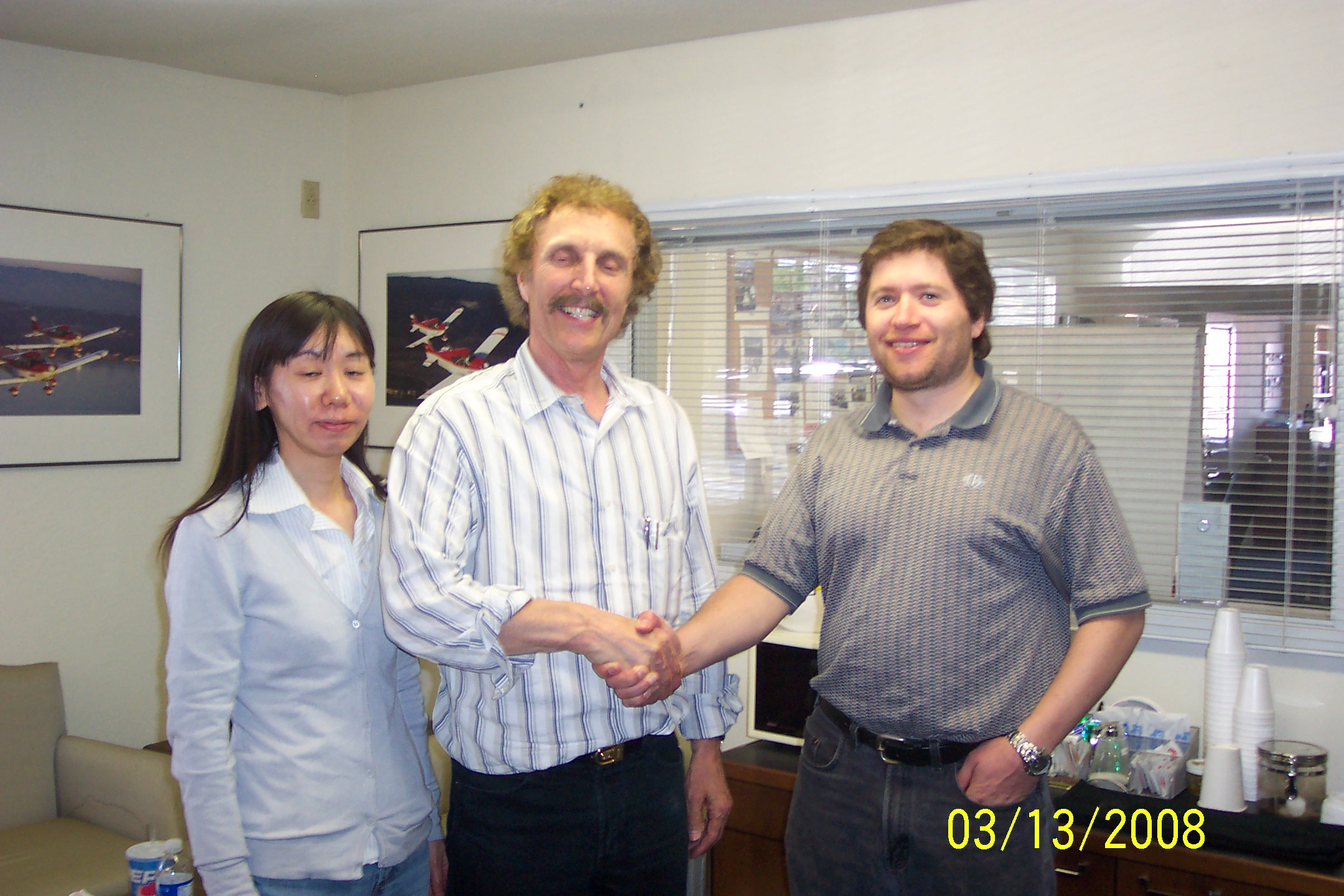 Ernst Hunziger became our first Commercial AMEL in the refurbished Duchess N25B, spending just 1 week on the training. Ernst and his instructor, Peter Sturdza, engaged in an intense accelerated program to achieve the goal. Again, Sherry Diamond was the examiner.

N6190R is our C172RG. To the uninitiated, the C172RG, or Cutlass, is just another 172. But this is far from the true situation. It is what the FAA classifies as a complex airplane, having flaps, a constant speed prop, and retractable gear. These attributes, along with its 180 hp engine, speed the Cutlass along at about 135 kt. It is a good load carrier too, with a useful load of over 1000 pounds, including 62 gallons usable fuel. 90R fills two roles in the club. It is an excellent load carrying, cross country airplane. In addition, it is the ideal airplane in which train for a commercial ticket.