Bret Smith earned his CFI rating this month.   Working with April Gafford and Fred Thomas, Bret made it through what many consider the most difficult rating with "flying colors".

John Inks soloed again.  John, who working toward his private pilot√ïs certificate had to step away from his flying lessons for about a year shortly after having soloed.  He returned to the air a couple of months ago, reacquainted himself with the basics of flying, and did some rather impressive full-stall landings.  Fred Thomas was the proud CFI sitting on the bench.

Our Piper Archer, 2865M, has been sent to the avionics shop where it is having a bit of a face lift.  When it returns, it will be sporting a brand new IFR certificated Garmin GPS.  Look for its return to the fleet.  The price may change but it will have a great navigational tool.

Mark your calendars for Thursday, February 2.

Tonya Patterson, the Acting Air Traffic Manager at Palo Alto Tower as well as Supervisor at San Jose Tower, will present on Radio Communications, Runway Incursions (from Tower and Pilot perspectives), and Airspace.

Tonya Patterson, the Acting Air Traffic Manager at Palo Alto Tower as well as Supervisor at San Jose Tower, will present on appropriate Radio Communications, how to avoid Runway Incursions (from Tower and Pilot perspectives), and Airspace requirements and procedures. Tonya served in the Navy for 8 years as a Controller in such locales as Alameda (before the closure), Miramar with the F-14 Training Squadrons, the Philippines, and San Carlos Tower. Palo Alto Tower was her first FAA assignment.

The following discussion was taken from AOPA on-line without permission. Although the FAA has always conducted "Ramp Checks", apparently the incidence of them are becoming more prevalent or maybe they are occurring at the same rate but are being reported to the AOPA more frequently.   Regardless of the reason, below are some "do's and don'ts" in the event you are approached a person who greets you with:  "Hello, I am from the FAA and I am here to help you".

Pilots are expected to conduct flights safely and remain in compliance with the Federal Aviation Regulations. The FAA conducts "ramp checks" to ensure pilots maintain these expectations. Though generally straightforward, some ramp checks end up with enforcement actions against the pilot. This subject report provides guidance and suggestions on how to properly handle an FAA ramp check.

A typical check involves the inspection of the pilot's airman and medical certificates and aircraft paperwork and an exterior inspection of an aircraft. The inspector may use a "Job Aid" during the inspection; this aid helps demystify the expectations. A cooperative and diplomatic attitude will usually result in a positive ramp inspection.

An FAA ramp check may occur when an inspector:

The check basically involves a review of the airman and the aircraft. The findings from both are usually noted on the FAR Part 91 Ramp Inspection Job Aid.

The inspector is not authorized to detain you if it means missing a flight or making an engagement. They may only keep you long enough to check the required paperwork.

If requested, the pilot is required to present his or her pilot and medical certificates and a photo ID; and if applicable, the logbook. Only student pilots and recreational pilots are required to carry logbooks; all other pilots are advised to keep their logbooks at home. Don't be alarmed if the inspector begins noting this information on his Job Aid. Presenting the documentation is required, but not physically releasing the documents.

The inspector is not authorized to board your aircraft without the knowledge of the crew. They may inspect the exterior and look through windows.

The inspector is authorized to inspect:

AOPA suggests cooperating with the inspectors, and the following may help reduce the time and scope of the inspection:

If the ramp check is due to a possible violation, anything you say or do may be used against you.

Did you know the taxiway markings at several major airports have changed slightly?  Again, in the interest of safe aviation, the following has been taken from AOPA. 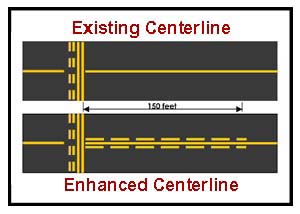